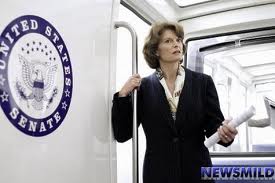 Republican candidate, Joe Miller fighting a legal battle for Alaska seat in the House has just taken a U-turn now. He stated that he was no longer interested in preventing certification of the Senate race however; he did not greet his rival candidate Senator Lisa Murkowski who will be declared successful now.

Ms. Murkowski is ahead in the race for a seat in US Senate by 10000 votes according to exit poll results. She would begin her term from January 5. A complain by Joe Miller, a Republican candidate, over charges of fault in vote counting methods had obliged the electoral officials to issue a stay order on her certification.

There were repeated concerns raised by Alaskan authorities and Ms Murkowski over Mr. Miller’s allegations that left no option for the state except representing itself with a single candidate in the next session of the Congress in January.

However, Ralph R. Beistline, judge of the Federal District Court clarified that Ms Murkowski   could get her certification despite the challenge made by Joe Miller. The same judge had ordered stay on the particular Senate seat.

Though Joe Miller stated that he was no longer interested in opposing the cancellation of stay order, his claims continued repeating the allegation over inconsistency in state’s vote counting.