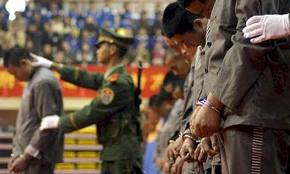 Human rights group Amnesty International has alleged that the Libyan security forces have gunned down 46 people in the past three days. It reported that 28 people were shot dead and 110 injured when security forces cracked down on protestors in Benghazi city.

Malcom Smart, Director of Amnesty International’s Middle East and North America regions said, “This alarming rise in the death toll, and the reported nature of the victims’ injuries, strongly suggests that security forces are permitted to use lethal force against unarmed protesters calling for political change.”

Victims were shot in the chest, neck and head. The BBC reports that protestors were shot at when they reached a residential compound used by Gaddafi when he visits Benghazi.

Smart demanded that the people who are responsible for these killings should be reined in immediately. Those who are carrying out the shootings and those ordering them should be brought to justice.

The unrest was taking place in Benghazi city in Libya. It is the second biggest city after Tripoli and people were protesting there unarmed against the Muammar Gaddafi government. A section of the press had reported strong action by the government on protestors. Websites have been blocked and electricity supply has been cut off to some areas.