The wind of revolution has engulfed entire Saudi Arabia, Yemen and Bahrain following Egypt, Tunisia and many other nations in the Middle East region.

Thousands of people demanding ouster of the current autocratic regime in Bahrain protested against the suppressive rule. It is been more than a week with violent protests and clashes between opponents of Saudi Arabian government and security forces. The protestors are demanding release of the people who are detained by the police without any charges.

More than a hundred people are estimated to have been injured after security forces used tear gas and batons against the protestors while they were marching to close down the financial center of Manama. The demonstrators threw stones and gas canisters over the security forces in return.

In Yemen, the security forces had to fire against the demonstrators demanding overthrow of autocratioc government. Seven protestors were killed while many others were injured in the clashes. 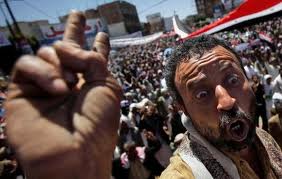 The United States strongly condemned security forces’ actions in Yemen and Bahrain and urged the governments of the two nations to initiate peaceful talks with opposition groups.

In Saudi Arabia too, thousands of people demonstrated against imprisonment of their relatives by the security persons without any reason. The demonstrators rallied in front of the Interior Ministry demanding immediate release of the people detained, however, there have no violence so far.