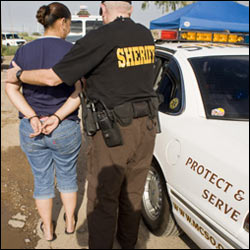 Arizona: The new immigration law in Arizona goes into effect July 29.
Over the past 10 years, the citizens in Arizona has expressed growing frustration with a lack of action from the federal government. The public is also concerned over violence committed by illegal immigrants in Arizona. Many people believe that the authorities are not doing enough to solve the problem.

In April this year, Senate gave final approval to an amended SB 1070 and the bill went to Governor Brewer signed it into law. The new Arizona immigration law makes it a state crime to be in the country illegally and requires law enforcement to question an individual’s legal status if an officer has reasonable suspicion.