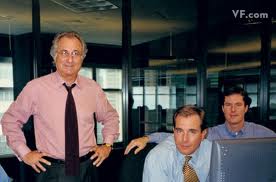 Mark Madoff with father and brother

New York: Mark Madoff, son of Bernard Madoff – a famous fund manager at Wall Street, had been living a miserable life since the arrest of his father in one of the biggest financial scams of all time.

Mark, 46,  had seemed to have it all, a lavish lifestyle, fame, success and enormous wealth and all these were befitting his father’s sheer brilliance as a businessman. After college, Mark joined brokerage and rose to very senior positions in the family business, whose clients ranged from Hollywood personality Steven Spielberg, other billionaires to retirees investing their life-time savings.

On December 11, 2008, to the disbelief of everyone and shock of his clients, Bernard Madoff was arrested at his breakfast table on the charges of biggest financial irregularity. Since the arrest of his father, Mark had been living a very disturbed life with a depressed state of mind, according to his close friends.

But on December 11, 2010, the second anniversary of Bernard Madoff’s arrest, Mark was found dead in his apartment in Manhattan. Few days back, he was framed in a civil lawsuit amidst growing speculations that he might face criminal charges.

According to close friends, Mark had not spoken with his parents for the past two years and had been trying to get a trader job at Wall Street.

In the past, Mark had insisted several times that he had no knowledge about his father’s wrongdoings and it was only on December 10, 2008, when his father conceded running a $50 billion scam that was collapsing in the financial turmoil.

Mark’s role was still under investigation and he was utterly depressed over the media coverage speculating criminal charges against him.