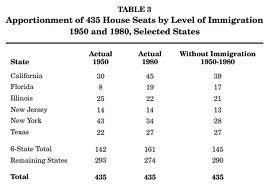 A recent population tally figure of California unveiled by the US Census Bureau denies the state any new seat in the House of Representatives. The 2010 decennial population figures are in conflict with a higher population count carried out by the state.

California has been gaining new seats every ten years after it attained statehood in 1850. But this time the census figures show a very small percentage increase over the growth in the last decade. This denial has happened for the first time in the last 90 years.

In this regard, Hans Johnson, director of research at the Public Policy Institute of California said, “You might consider this an indicator of the maturation of the state. At some point, it had to stop growing as much as it had. California has always had a growing piece of the pie, and this is the first time we haven’t had that. That’s certainly going to disappoint some people.”

California will have to contend with the 53 seats in the House of Representative. As per the Department of Finance’s figures it would have earned two more seats taking the number to 55. Ratcheting up the issue will be of no use as the Supreme Court has ruled in a lawsuit in 2000 that the Census Bureau’s figures are final.