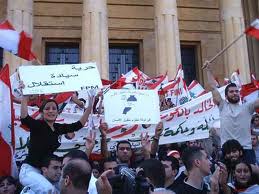 Syrians witnessed an intense upsurge of feelings against the autocratic government with thousands of demonstraters marching in the capital ciry roaring slogans against the President Bashar al-Assad. Many of the protesters have been killed and injured during fierce clashes with the government supporting security forces in Syria.

Surprisingly, the demonstrations speeded up after the Syrian president tried to lure and appease them with some economic and political concessions.

The international community involving security forces from the United States, Israel and Europe affirm that Assad’s government is losing control over the regime.

The unrest among Syrian people has a great potential of turning into a wide scale violent rebel to force Mr Assad to step down from president’s post.

The international community fears over the possibilities of another unrest in the Middle East following Syrian crisis.

The political crisis stated in the last week amidst rebels everywhere in the Middle East—following Egypt, Southern Syrian towns have witnessed violent confrontations among government security forces and protesters and in the capital city Damascus.

Last Friday thousands of protesters came into streets asking fo reforms and grieved over the death of people during violence clashes with security forces. If the same situation continues, Syria might face regional repercussions. Being a key factor in the Middle East politics, Syria influences Iran, Lebanon and Palestine, It supports Hezbollah and Hamas and this way creates a pain to the United States, which has always boasted to be the big brother, and crusader of anti-terrorism campaign.