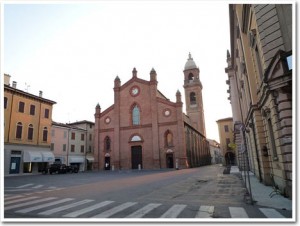 On Tuesday morning a 5.8-magnitude earth quake shook a large swath of northern Italy, killing around 15 people. The initial reports indicate that the quake also brought down buildings in the area already damaged by an earthquake that struck the area a week ago.

The latest earth quake struck at 8:30 am when many more local businesses and factories were open. This is likely to result in higher death toll in the latest earthquake in Italy. The tremors were reported to have felt as far away as Austria. The center of the quake is believed to be approximately 25 miles (40km) north-west of Bologna, near Mirandola, close to where a 6-magnitude quake struck in the early hours of 20 May, which killed seven people.

In Cavezzo’s old city centre, several buildings and the back half of the city church were reduced to rubble. Tents had been set up near the town’s sports complex and cots laid out in the tennis courts. Frightened residents sat or stood outside their homes, unsure of their next steps.

“I ran out of the fruit and vegetable store where I work as everything was falling off the shelves,” said Marzia Dondi, 42, as she stood outside her home with her two sons, aged 15 and 9. “We haven’t slept inside since last Sunday’s quake. We’re afraid to go back in. What a disaster. We were finally starting to calm down.”

Rescue workers are searching for survivors at the quake hit area. Authorities have asked the people not to panic and have faith in their rescue operations.