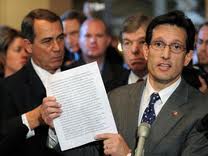 Repealing health care law will be the first objective of Republicans in the House. However experts are saying that the revoke will endanger financial security of more than 32 million people of the USA due to lack of insurance coverage for them.

This would also cause to a larger financial deficit with a raise of $230 billion for the American economy. People will be forced to pay for private health insurance after the cancellation of Obama’s health care law.

Though the opposition has already initiated the process of repeal, they would need a majority in the House. The Republicans have also pledged to minimize financial deficit by introducing a better bill that would replace the health care law.

The experts predict a new trend in the changing political scenario, where the Republicans will control  the House. for Democrats President Obama’s healthcare law is one of their landmark achievements that they will try to retain any how. But even if they succeed in retaining the law, the opposition will create obstacle in its funding.

According to the financial analysis made by CBO [Congressional Budget Office], the repeal of health care law will cost around $145 billion in the initial stage and will reach $230 billion approximately by 2021. Thus, not only it would raise the burden of taxes on Americans but would also hamper many other activities due to shift of funds.