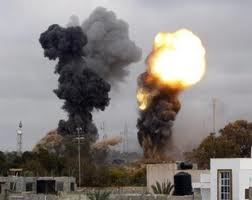 Residents of the city of Tripoli reported flashes and smokes in the eastern part of the capital in early hours of Sunday. NATO air attack comes three days after Libyan leader Col Moamar Gadhafi had boasted that he would never surrender to the foreign forces trying to topple his government.

NATO was in Libya to carry out UN mandate against Libyan government which was using extreme forces against the civilian elements of the population who were protesting to have Gadhafi out of power. There are criticisms about NATO attack; there are instances of confirmed report of civilian casualties.