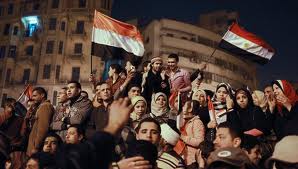 There was a high surge in World stocks soon after the resignation of Egyptian President Hosni Mubarak as oil prices fell abruptly. This was probably due to fear among investors about coming political chaos in the Middle East.

U.S. stocks took a defensive approach by closing out gains of second week,

Ralph Preston, an analyst stated that there is a scope of global economic expansion as fear of violent transition of power has disappeared from Egypt. There is no such risk in Egyptian market for the investors now.

Egypt Index ETF <EGPT.P for Market Vectors climbed up from 4.5 percent to a record level of $18.60.

Despite the optimistic rise, the U.S. dollar kept on getting stronger with the government debt as the question of swift of power is still dwindling over Egypt that is likely to stir all oil-producing nations in the Middle East region.

The U.S. economic is improving every day with the strengthening of dollar.

commodity prices were expected to increase  and this could adversely affect the dollar.

Egyptian President Mubarak finally gave up after a long mass protests by the opposition groups for 18 days. With this, his 30-years autocracy on Egypt ended paving way for democracy in the country.