New York: – Gorilla glass an ultra strong glass that was invested in 1962 is gaining fast popularity.
Gorilla glass which could not find a commercial use has finally picked up, as stylish HDTV models and touch-screen devices are spreading among consumers. And as a result the 1962 Gorilla glass on the brink to become a multibillion-dollar business for the 159-year-old glass pioneer Corning Inc. 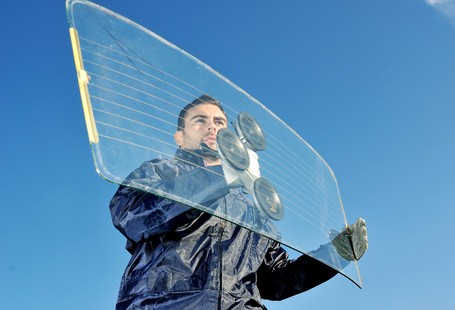 Gorilla demonstrated early promise in the 1960s, but failed to find a business use, and hence was waiting for its time in a hilltop research lab for nearly a half-century. Gorilla Glass picked up its first client in the year 2008 and has swiftly become a $160 million a year business as a shielding layer over the screens of more than 35 million mobile phones and other mobile equipments.

What makes the Gorilla Glass looks promising is the latest trend in HDTVs which is Frameless flat-screens. Since Gorilla glass is very tough to break or scratch, the company is expecting that it will be the glass of choice as HDTV-set producers when the TV manufacturers starts eliminating the plastic and metallic frames for a stylish chic-look.
According to company scientists Gorilla glass is two to three times stronger than chemically strengthened versions of ordinary soda-lime glass, even when just half as thick. This means TV manufacturers can make flat screen panels with Gorilla glass thinner than a dime, saving on weight and shipping costs.

Corning Inc which is based in New York, is the world’s largest manufacturer of glass for liquid-crystal-display computers and TVs. High-margin LCD glass generated the bulk of Corning’s $5.4 billion in 2009 sales. By ramping up production volume rapidly in a growing market, Corning is following a well-worn tactic intended to keep rivals from gaining ground. Corning is in talks with Asian HD TV manufacturers to get Gorilla to the Television market in 2011 and expects to reach its first deal soon.