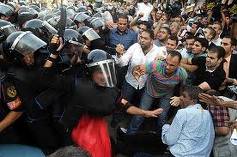 Iran’s president Ahmadinejad  calls Egyptians uprising against President Hosni Mubarak as a new serge of Islamic Middle East is emerging. He further stated that this new change will have no contribution or interference of the United States or Israel.

Ahmadinejad gave this statement while addressing Iranian people on the occasion of the 32nd anniversary of its 1979 Islamic Revolution.

The Iranian leader showed his apathy at a time when entire Egypt is facing a political crisis. Egyptian President has appointed his deputy to take authority but refused to resign despite being pressurized by global community. The pressure began following a continuous mass protest by thousands of his opponents for more than 17 days demanding Mubarak’s resignation.

Thousands of Iranians have marched to protest in support of Egyptian people demanding Hosni Mubarak’s ouster. Many effigies of Hosni Mubarak were also set ablaze in Iran.

Iranian media too supported the cause of Egyptian people showing live footage of mass protests in Cairo at Tahir Square.

Iran itself is not in harmony with the international community due to its disputed nuclear program. Still, it hails mass uprisings in Tunisia and Egypt by calling them a ‘replay of its own Islamic Revolution.’

Ahmadinejad also stated that the new Middle East would grow without any interference from US and Zionist regime.