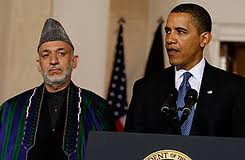 As the president was lambasting the foreign forces suicide bombers who dressed in Afghani army uniform carried out an attack in a police facility causing heavy gun battle that lasted for over three hours. The incident led to the loss of many lives including the suicide attackers. After the incident the spokesperson for the Taliban claimed responsibility for the assault.

There were conflicting report of what president Karzai said and what he did not say. Some reports of the same comment by the president did not say anything about peace talks.

Report had it that a government spokesperson said that the president had advised the Taliban to accept the constitution of Afghanistan. US embassy officials have declined to comment on the development.