Microsoft unveils Surface tablets powered by Windows 8 operating system. Yesterday we posted about the possible lauch of Microsoft tablet. Here are some pictures from the official surface website. 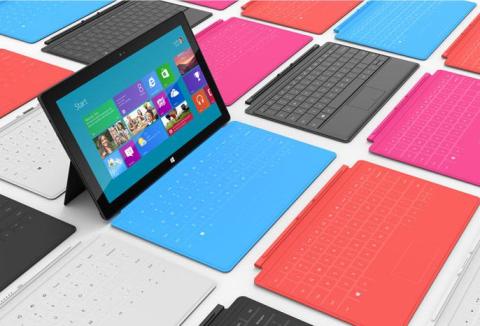 The first thing you will notice is the Touch Cover of surface tablet which acts as keyboard and trackpad. This keyboard which comes in different colors is just 0.12inch (3mm) thick. 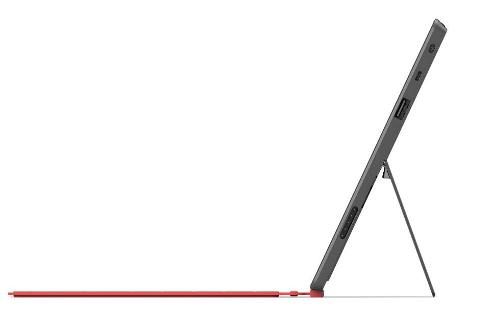 Many of those who own iPad buy expensive cover to protect their favorite gadget from getting scratches. Microsoft found an opportunity here to add a built-in protective cover which will also work as keypad and track-pad. Business customers who are serious about working on tablet would love this feature.

The official videos is posted on Youtube. You can watch the surface tablet video by clciking on the play button below.

The gadget have built-in kickstands with which you can easily place the tablet upright. The display screen measures 10.6 inch (26.9cm) and the surface tablet comes in magnesium cases.

Surface Models
According to the official website surface tablet will be available in two variations.

The congress woman was speaking when she observed thousands of job seekers line up in the heat at job fair that was organized at a technical college in Atlanta. It was the congressional black caucus that planned the job fair.

Speaking on the unemployment situation in the country Democrat Rep Maxine Walters of California said he was stunned by number of people that attended the job fair. He said that he was expecting about five hundred people to the fair but it turned out that thousand of job seekers graced the occasion.

The congresswoman told reporters that black voters have given her the permission to criticize president Barak Obama administration’s policy on job creation. She said that she is not just criticizing the president but that she tries to engage more people to help the president to have a clear understanding of the pain people are going through as a result of job situation in the country.

In the global market of omputer industry Android media tablets have paved their way to speedy growth by attaining greater market share. In comparison to its competitor ipad, Android tablets are soon going to give tough competition to leading brand of Apple too.

Android-based media tablets and other products have swept 2o prcent of market share from the rival ipad in last one year, according to a recent research study on media tablets and their market status by ABI Research.

Though the results of this study are yet to be verified by technology market experts, the news has already stirred the tech industry. If this proves true, Android will definitely break Apple’s dominance and monopoly in the market.

However,Google’s Android  Operating System is yet to cross many obstacles and its fragmentation is a problematic issue. No app developer would be interested in developing Android app if they do not find ample profit potential in making Android media tablets.

However, Android is not the sole competitor for Apple, and many small names in the market have come up with cheaper options. Smaller options like that of HTC Flyer, Samsung Galaxy Tab etc., are better for those people who do not want 9-7 inches large ipads. Lesser prices also attract a good number of consumers. , HP has come up with $399 touchpad and Iconioa Tab A100 is just $329.

The US House of Representatives has approved proposed $7 billion pipeline The Democratic government has moved forward to set a deadline for the pipeline that will bring Canadian oil sands crude to the United States .

The bill received 279-147 votes in its favor and this eventually pressurizes the state to allow transport of Canadian oil sands crude to California by 1 November via Keystone XL pipeline.

Ed Whitfield, a Republican stated that the pipeline continued being held up for three years due to many reasons, and now the approved bill has removed all the big obstacles for it.

700,000 barrels of crude oil per day. It will transfer oilfrom Alberta to refineries situated at US Gulf coast. This would also help in securing energy supply in the country as well as promote employment. However, the bill is yet to become a law and it needs to be passed by the Senate, where DEmocrates dominate the scene.

Keystone XL pipeline has raise many environmental concerns too and therefore received strong resistance from those who oppose the bill. The oil sand production in Canada is carbon-intensive, and therefore contributes to greater pollution.

from the incidents of leakage in Exxon Mobil’s Silvertip oil pipeline has also set people to raise concern over the viability ofKeystone XL pipeline.

Count down for saving itself from debt default has already started for the Obama administration.The Congress is fighting fiercely  in the weekend session on Capitol Hill to save the United States from another aftermath of economic crunch.

The GOP-led House approved the bill seeking for increasing borrowing limit for the US economy from the previous limit of $14.3  for an expensive deal for reducingcuts and other budgetary amendment.

However it too the Democrats almost two hours to set for a test vote for building up their own debt ceiling and thrust it over their opponents.

The Democrats, Republicans and the US government are to negotiate deeply over this issue looking for the most acceptable compromise to make the economy run and GOP senators are expected to play vital roles in this regard.

Obama, revealed on Saturday that his government was short of time and called on all diplomats to end “political gamesmanship” for the sake of America and its people. The final outcome of this fiasco is yet to be seen however, it is quite obvious that both the Democrats and the Republicans are standing at odd edges this time and looking for ways to pressurize diplomats for an additional budget.

The debt-crisis driven US economy seeks for earning from  taxes from online transactions  and that too in billions! A senator presents a bill on Friday that claims to seek solutions for the giant financial crunch that the US economy is fighting with, by earning from nothing.

The United States is to lose an additional $10 billion in 2011 and $11.4 billion next year to pay sale taxes which are left uncollected during online shopping and other transactions, concluded a group of three professors at Tennessee.

Democratic Senator Dick Durbin, who has come up with a bill for sale tax reforms is supported by institutions like the National Governors Association as well as the National Retail Federation  and also received affirmation from many online retailers, including Amazon.

Luke Kenley, a state senator from Indiana confirmed that this strategy is being initiated at the state level and a group of 24 states called Streamlined Sales Tax Governing Board, which he heads, is already calling on the Congress to come up with a uniform sale tax for all retailers, be it online or else.

Currently accounting for a volume of size of $165 billion, the online retail market is a new sphere of attention for the financial experts, who predict a bright possibility of 15 percent annual growth in the industry in next ten years.

The United States is failing to break through its debt deadlock. The US Federal Reserve is now gearing up to provide new guidelines to American banks to save themselves through resurging recession.In case the country fails to revamp its borrowing capacity, all the banks would face hard time to survive through tough waters.

Fed spokeswoman Barbara Hagenbaugh revealed on Thursday that the Federal Reserve is hopeful to provide proper guidelines for an operational financial planning.

The US Treasury has clarified that it would not be able to fetch more loans if the Congress fails to raise the debt ceiling from $14.3 trillion. This would also bring the possibilities of fall of Obama government eventually.

A debt default will also make the American economy succumb to severe financial crisis. The officer did not, however reveal anything about the measures of contingency plans being thought over by the authorities.

Officials also showed optimism that the US economy may survive this crisis provided Obama administration comes up with a hard solution before August 2 deadline.

Experts, however, predict severe results of debt default over US financial market and economy. The officials have also indicated of the possibilities of need for reevaluation of alternative strategies for US banks to be able to use emergency loans.

As the financial year in the United States of America ended reports that emanated from the states indicated that the revenue of most of the states increased but the problem of gap in budget was an issue in many of the states. The financial position was released on Monday.

The report that was released by Center of Budget and Policy Priorities, about 28 states in the United States of America have positive result on tax collection as they reported that the tax collection was above their expectation within the past financial year. The report also indicated that there is an increase in corporate profit which is as a result of the fact that many individuals, families including wealthy individuals fulfilled their obligations which made it possible for the income to be more than was expected in many of the states.

Most states in the United States of America end their fiscal year in June 30th. The worst of the economy was reported in 2007 to 2009 period when the world witnessed one of the worst economic recessions in history. Most states during that period could not meet their income targets and some failed on their obligations.

However, the increase in revenue to the states could not close the gap that is witnessed in budgeting. Most of the states are expressing interests not hike tax as well as the federal government which means that most of the states have to cut down on some of their expenses.

Seoul shares were range bound on Friday despite positive U.S. employment and retail data, pressured by profit-taking and caution ahead of a critical payrolls report.

“There is caution ahead of the expiry of options next week. The market is likely to take a breather next week after recent gains,” said Hana Daetoo Securities analyst Lee Joon-seong.

On Thursday, technology bellwether Samsung Electronics forecast a 26 percent fall in second-quarter profit, clouding the outlook for the sector bracing for its earnings season late this month.

Hynix Semiconductor Inc firmed 2.1 percent after a media report that SK Telecom Co Ltd planned to bid for a controlling stake in the world’s second-biggest memory chipmaker. A spokesman for parent SK Group said SK Telecom was likely to make a solo bid for Hynix, although a final decision had not been made.

KB Financial Group Inc rose as much as 3.6 percent after unit Kookmin Bank said on Friday that it had sold a 9 percent stake worth $1.7 billion in its parent group within the offered price range.