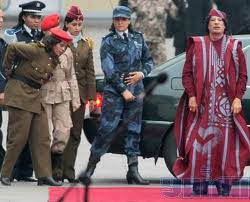 Libyan President settles down for agreement with AU

Finally Moammar Gadhafi, the besieged president of Libya has come to agreement with the International community–African Union [AU] over ending the prolonged conflict with opponents, revealed the South African president Jacob Juma. However the terms and conditions of the agreement that was negotiated between the African Union delegation and Gaddafi have not been revealed yet.

Gaddafi attended the meeting in Tripoli. It was the Libyan leader’s second meet with the delegates.

The African Union took initiative on behalf of the entire global community to stop the violence suppression of rebellions by the pro-Gaddafi security forces in Libya. The delegates are expected to meet the rebellions and Gaddafi’s opposition members after this meet to negotiate further for establishing peace and stability in Libya.

The opposition leader and their supporters are centered presently at their stronghold in in Benghazi.

Mohamed Ould Abdel Aziz, the president of Mauritania talked to media over ways to resolve the Libyan crisis. He added that the main aim of the AU was to halt the military operations there in Libya and seek for a peaceful solution to the crisis.