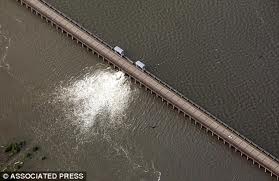 Mississippi flooding has led to the opening of the Morganza floodway in Louisiana. This is causing troubles for the Cajun county because it is sending floods from Mississippi river.

The option to open the waterway was to forestall impending flooding which was forecast by the National Weather Service which estimated that the flow of the river would be more than 1.5 million cubic of water per second. The city levee would not be able to carry such a volume of water. The other option that was left was to open the floodgate to make for the increase in the water volume.

But few minutes of opening the gate the water started causing havoc by flooding the river basin. This has put the river in the state to be under serious pressure. This pressure is believed will continue to be for a long time to come according to the president of the Mississippi River Commission Major Gen Walsh. He promised that the river would be given what it needs. The flooding is posing a challenge to the waterborne commerce.

This has led to the closing of the bridge which is the major source of outlet outside the bridge and the closure would continue to be there until the total inspection is complete.