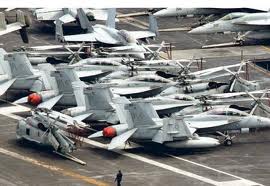 The military exercise, which lasted for few hours, was conducted nearly after a month since North Korean army bombarded Yeonpyeong Island. The attack targeting civilian areas, killing marines and construction workers, was the first since the Korean War of 1950-53. Since then the Korean peninsula remained volatile and disturbed.

The UN diplomats organized a meeting on Sunday to fins a solution to the problem but in vain. North Korea described the military drills an irresponsible act of Seoul but said that it would hold own fire as South Korean army had changed its firing zones. North Korea has been claiming the waters around Yeonpyeong as its region. After the exchange of firings last month, Pyongyang accused the South Korean army of firing missiles into its waters but Seoul refuted the claim by saying that artilleries were fired in the southern direction.

North Korea, however, issued another boiling statement in which it vowed to go for military attack.

Meanwhile, South Korean president Lee Myung-bak has said that Seoul is equipped enough to tackle untoward circumstances if any arising out of military clash with North Korea.

The US and others wanted the United Nations Security Council to condemn military firing of North Korea and blamed the North for igniting the already tensed atmosphere in the peninsula.