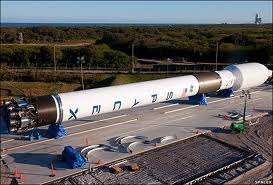 NASA is hopeful to launch rockets for international space station. The organization is set to test it SpaceX Falcon 9 at Cape Canaveral Air Force Station situated in Florida.

After successful completion of the test, the device will circle around the earth and sink down in the Pacific Ocean after finishing its tasks. SpaceX Falcon 9 was first tried in the early morning around 9 am but could not take off due to some technical fault. Later it was re-launched after 90 minutes.

This space rocket is being tested for the first time and right now unmanned. NASA however, plans to send humans later on and use the rocket as a cargo to space station.

The United States is very enthusiastic about the launch of SpaceX Falcon 9 and earn from the commercial space industry. The US government further plans to send astronauts to Mars using these rockets.

The incumbent President, Barack Obama tried to increase funds for NASA space projects but could not succeed due to severe resistance from his opponents.

SpaceX is a commercial space company owned by Elon Musk. The company started its venture with a launch of Dragon 9.

The SpaceX Falcon 9 has cost 1 billion of which NASA funded only $253 million.

The launch of SpaceX Falcon 9 is considered a very fast and cheaper venture than previous projects.