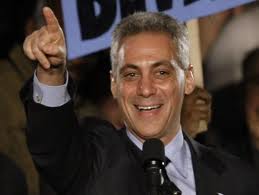 Emanuel had won almost 55% of the vote with this he has left his rivals far behind.

Tuesday’s vote was dominated by the Democrats in absence of any Republican candidate. Emanuel will replace Richard M. Daley for the post o Chicago mayor.

Daley became a mayor of Chicago in1989. His father also held the same post from 1955-76. The two Daleys have been longest serving mayors in Chicago so far.

Emanuel showed his capability to win the elections from the very beginning of his poll campaign in November as he has been a key aide to Obama. However it is true that he was not well known in his native city Chicago despite serving three terms in the Congress.

His intense campaigns including speeches at 357 stops and 229 community locations, schools, churches and subway stations brought fruitful results in making a place in the heart of Chicago people.

Emanuel also used his connections with the President Obama and Clinton to advertise himself and attack his rivals.

Emanuel also defended himself against the charges of not being a legal resident of Chicago that would defy his candidacy for the mayor’s run. Key issues on which he defeated his opponents were ways to tackle with city’s $654 million deficit and reforms in pension system and administration to curb crimes.