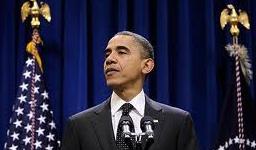 Obama in good standing among Democrats

Republicans are losing grounds so far the campaign for 2012 presidential polls are concerned. Sarah Palin, the perspective rival to Obama is losing the center stage within Republican Party as leaders like Mike Huckabee, Mitt Romney and Newt Gingrich are getting more focus now.

Presidential advisers haven given an indication that Republicans are likely to campaign from Chicago. A recent poll has shown Obama with less competition from Sara Palin as she is no more seen as a potential candidate for 2012 elections whereas Obama has gained more popularity among Democrats. The survey was an opinion poll and conducted between Dec 17 and 19 with 1008 American who were interrogated over phone..

The poll finds Obama is improving his standing with Democrats for their nomination for 2012 elections and despite the dissatisfaction over Tax-cut policy, 78 percent Democrats consider him as their candidate for 2012 polls.

At the same time, Sarah Palin who was considered a big rival earlier has now lost 18 points within the Republican Party and only 49 percent party members are likely to nominate her for the next campaign for presidency.