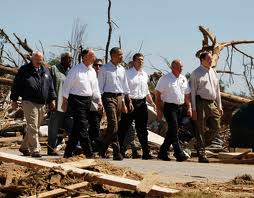 The officials of the government of the United States of America have visited the tornado affected cities of Alabama on Friday and Sunday and vowed to take action.

When the Homeland and Security secretary visited the devastated city she was accompanied by two cabinet secretaries as well as some journalists and lots of other government officials drawn from the federal, state and local government levels. They observed some of the damaged infrastructures such as the electrical wires and other items that were damaged by the storm.

As the government officials visited the devastated areas one could see the residents groping with the event. Some of the residents even exchanged views with the officials that have come to see things for themselves.

It would be recalled that heavy tornado hit the city of Alabama last week causing untold hardships to the residents. However one is expecting that the administration will live up to its promises by bringing succor to the affected people.