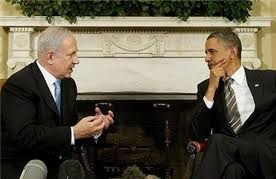 President Barack Obama believes that the only way to bring about a lasting peace in Mideast is for Israel to respect the 1967 borders. It is the thinking of the administration that peace would continue to elude both Israel and Palestine unless Israel put hold to the expansions that is going on beyond the 1967 borders. The administration believes that it is only a parallel state that exists beside each other that can bring peace to the much troubled Middle East.

This American position is not going down well with the prime minister of Israel Mr. Benjamin Netanyahu. He was furious about the American position and described it as already determining the destiny of the territory in question even the actual talk begins. He said that any talk about the pre 1967 border is completely out of touch with the realities on ground in the Middle East. He said the state of Israel would never agree to such a proposal.

The prime minister criticized the policy  by president Obama as well as the Republican party presidential aspirant Miti Romney saying that they have thrown the state of Israel under the bus. The reactions from the inside and outside the US and Israel are such furious that people have started wondering whether Obama is trying to undermine the state of Israel.