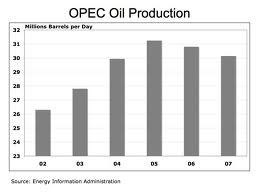 Already the market has reacted to the outcome of the meeting. The prices of oil went up in the international market.