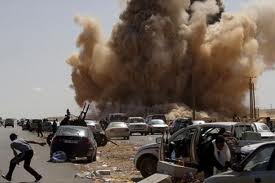 Libyan crisis does not seem to reach any end so far. The call for ceasefire by the outrageous rebellions who have been continuously fighting with the pro-government security forces has been rejected. The forces did not leave the cities despite demonstraters’ demand for the same.

Gaddafi government’s spokesperson Mussa Ibrahim called it a madness of the rebellions to ask pro-government forces to withdraw from their own cities in Libya.

The rebellions called for a ceasefire after the pro-government security forces suppressed them violently amidst the air strikes by NATO forces in support. However, despite the pressure of international community and direct intervention by the NATO-led forces, Gaddafi’s stand against the rebellions has not changed a bit.

Mustafa Abdel Jalil, a representative of the anti-Gaddafi rebellions in Libya stated that pro-government forces should step back fromwestern cities as per their demand for ceasefire, however there was no response to this call from Gaddafi’s side and the security forces continued their oppression against the protesters.

The rebellions proposed for ceasefire following an statement by Mike Mullen, the chairman of the Joint Chiefs of Staff that the NATO-led international security forces would not accompany the US jets.

So far the United States has sent 90 aircrafts to support Libyan rebellions. Following their withdrawal from Libya, only NATO-led coalition would remain at Libyan front. This includes Qatar, UAE, Sweden, France and UK with 193 aircrafts altogether.