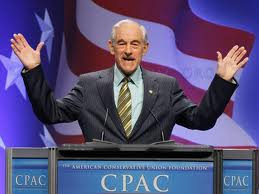 Republican Ron Paul of Texas recaptured the limelight at the Conservative Political Action Conference in the presidential straw elections. He received 30% votes in his favor.

Paul, had ran for Texas president also in 2008, and grabbed 31% to 22%. This year he is followed by ex-governor of Massachusetts, Mitt Romney. Gary Johnson, ex-governor of New Mexico and the current Governor of New Jersey, Chris Christie, received only 6% votes each.

Surprisingly Sarah Palin, Former Alaska Gov. was much behind the racing line with a mere 3 percent votes. She did not even speak at the conference.

It was a rigorous fight between the candidates. The entire polling area and roads were colored white with ballot papers spread everywhere. The runner candidate Romney had won in last polls by getting 24 percent votes defeating Paul by just a single vote.

David Keane, the CPAC organizer, stated that it was not a Gallup’s election. He revealed that around 3,742 people voted voluntarily in the presidential straw polls.  However, only 56% of voters were satisfied with the candidates and CPAC poll results. In 2010 only 46% people had showed pleasure with the expected candidates.