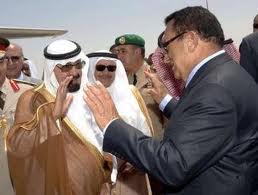 Egypt’s outgoing ruler Hosni Mubarak has some new corners of sympathy in Saudi Arabia against the humiliation by US President Barack Obama. Saudi has warned the United States not to enforce a hurried change of ruler in Egypt failing to which it might stand in support of President Mubarak. According to a report, Egyptian military has imprisoned thousands of Opposition members since the mass demonstration against Mubarak began a few weeks ago.

Despite many threatening from the government, the protestors have continued their demonstrations for more than 16 days so far.

According to the report, Obama had a telephonic conversation on 29 January with King Abdullah of Saudi Arabia, who warned the US against insulting Mubarak. Abdullah further stated that he would give financial support to Egypt in case the United States steps back to withdraw its $1.5 billion aid.

Despite being the closet friend of the United States in the Gulf region, Saudi is not happy with the way Obama is treating with Mubarak and urged the former to allow a peaceful transition in Egypt. The Saudi King is very close to Hosni Mubarak and he is hurt with the way the Egyptian president is being forced to step down.

Saudi concerns for Mubarak makes it quite clear how the United States has spoiled its diplomatic relation with the nation since 1973 oil crisis.