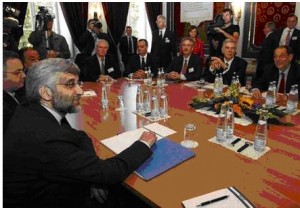 The Istanbul meeting ended without reaching any conclusion over Iran’s nuclear issue. Six world powers could not make Iran agree with their except for the next meet in the coming month. The meeting involved representatives from the US, Britain, Russia, China, France and Germany beside Iran.

The US officials revealed that the meeting could not draw any conclusion over the issue due to contradictory expectations from both sides.

EU foreign policy chief, Catherine Ashton, stated that the two parties agreed to talk in January to discuss alternatives for cooperation and to find a resolution over the nuclear issue.

However, Iran declared the meeting as ended with ‘vague’ suggestions. The Iranian negotiator Saeed Jalili stated that the next meeting between the six nations and Iran would be towards finding a platform for cooperation, which also he said was not something Iran proposed. It was Lady Ashton, EU foreign minister who said this and other members of the meeting agreed.

Iranian President Mahmoud Ahmadinejad had mentioned while addressing people in Tehran that Iran would talk further only if the international sanctions against her are dropped.

In the Geneva press conference, Jalali faulted nuclear scientist Shahriari’s murder and indirectly blamed the UN security council. The UNSC had declared four scientists including Shahriari as being involved in ‘banned nuclear activities.’