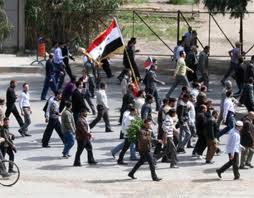 The government in Syria has proclaimed that it has taken control after seven weeks of uprising which seek to topple the government of president Bashar al-Assad.

This statement is a clear indication that the authority in Damascus is committed to using brute force to intimidate its citizen to back out of the revolution which is flushing out the old order in many Arabic states. The crackdown on pro democracy movements in the country has led to the death of hundreds if not thousands of people in the country.

The spokeswoman for the government Bouthaina Shaaban who also doubled as adviser to President Assad said that the government is taking control of the situation in the country and maintained they are prepared to whether the storm that is being generated by the international community over the excessive use of force against the citizens of the country by the government. She said that the uprising is coming to an end saying that they have passed the worst stage of the crises.

Her utterances have not being independently confirmed since the Syrian government has banned foreign journalists from the country since the crises started. It would be recalled the Assad family had been in power in Syria for more than four decades and they appeared to stick to power at all costs.