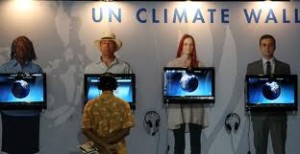 The United States has termed the conference on climate change in Cancun as ‘significant’ and promised to work with international community to remain focused on the environmental challenges in the coming days.

US president Obama hailed Mexican counterpart Felipe Calderon for showing exceptional leadership and chairing the Cancun conference to a successful outcome on the foundation laid down at Copenhagen last year. US Secretary of State Hillary Clinton said that the conference reached to a significant point under the United Nations framework and from here lot of meaningful results could be achieved. Ms Clinton further said that the United States along with its friend nations would make all efforts to tackle the climate change and other environment-related issues.

She expressed utter satisfaction over the progress made at Cancun conference and said that the outcome would take forward the core elements raised in the Copenhagen Accord, such as creating a new Green Climate Fund, Working on a culture of transparency, creating a framework to reduce deforestation, establishing a technology mechanism, seeking international cooperation and many others.

The United States has been working with its global partners to move forward and sort out all differences since the Copenhagen summit took place last year, she reiterated.

“The United States joined other countries at Cancun for a fresh round of discussions focused at mobilizing common efforts to meet the shared objective. So now that we have reached an important milestone, time has come to enlarge our vision and work together to meet the challenges that come our way,” Ms Clinton Said.

The Cancun Summit has been able to reach a ‘compromise’ to organize a $100 billion ‘Green Fund’ to fight global warming. There was, however, no agreement regarding the Kyoto Protocol on carbon emissions cuts beyond 2012. The development made at Cancun will be followed up in the next round of talks to be held next year.