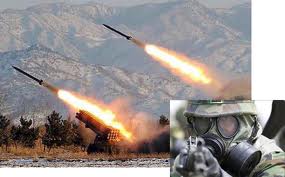 Tension between N Korea and S Korea is increasing

North Korea has blamed the United States and South Korea for setting the peninsula region on a path to a nuclear war by launching military drills. The South Korean administration has stated that the North Korea is all set to go for another nuclear test next year.

In a report published in a major North Korean daily stated that the military drill on Yeonpyeong Island near the disputed marine border was an act of intentional provocation and Pyongyang had been closely watching the irresponsible activities of warmongers inviting an atomic war. The report further said that if North Korea is forced into a war then it has every right to protect itself using best possible means. Pyongyang could go for another nuclear test sometime next year as it needs to refine plutonium bomb, South Korea’s Institute of Foreign Affairs and National Security said in a report published on its website.

North Korea has shown apprehensions regarding the military drills by South Korea and the US and said these kinds of activities are indicating toward a full-fledged invasion.

South Korean Defense Minister Kim Kwan Jin said that retaliation of any kind to further attack by the North Korea would include aerial attacks.