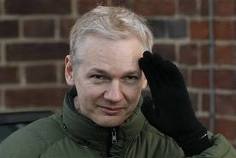 London: WikiLeaks chief fears that he would be killed if extradited to US on spying charges, according to a published report. He is currently staying in Britain after being released on bail last week.

Julian Assange is on bail in UK resisting Sweden’s effort to extradite him over rape charges, but US administration is also mulling ways to prosecute him on the charges of disclosing thousands of secret documents, which have tarnished US image worldwide.

The Australian has said in an interview that the UK can not extradite him for political crimes against the United States, but it remains at the will of the Britain government whether to take a call on US request or follow its own extradition policy.

Assange further said that the US authorities were ‘trying hard to finalize a plea pact’ with Bradley Manning, the US soldier suspected of providing WikiLeaks with secret documents.

from the UK, then there was a high probability of him being killed in the US prison.

The Australian has earlier said that several WikiLeaks staff have been threatened since the day the website started to publish a cache of around 250,000 secret US State Department documents in November.

Assange has been living at a friend’s residence in Britain since his bail last week on conditions that he will report to police on a daily basis and wear an electronic tag.

WikiLeaks chief’s case hearing would be starting again from February 7, 2011, on the extradition plea made by Sweden.