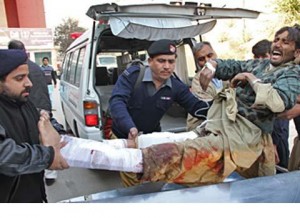 Clad in a veil and burqa, a suicide bomber attacked a food distribution center in Pakistan causing 42 deaths and injuring many others. The bomber attacked Khar town of Bajaur tribal area while there is a continuous fight among security forces and extremists at Afghanistan border. There was a clash also in Mohnad tribal region and more than 20 militant were killed.

The food distribution center was crowded with more than 1000 people gathered for receiving food aid. The attacker threw hand-grenades on people and then detonated explosives attached in his or her body. The identity of suicide bomber is yet unknown and it is not clear whether it was a woman or man.

There was a terrible chaotic scene visible after the explosion with bodies mangles and scattered everywhere. More than 60 people have been severely injured and hospitalized in the Peshawar hospital. The food distribution center shelters refugees coming from Afghanistan who have fled their homes or have been forcibly evacuated by the military forces.  The number of refugees has reached 300,000 due to military actions against militants since 2008.

NATO’s International Security officials revealed that they had killiedtwo militants on Friday clashes in Khowst and Logar provinces. Both Taliban and the Haqqani militants use Pakistan as a safe heaven for attacking Western troops in Afghanistan.