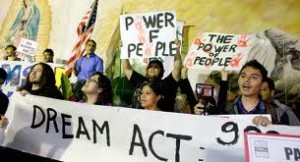 Jerry Brown, Governor of California has finally signed a bill to let illegal immigrants receive scholarship in the state and get education. The bill, which has finally become a dream law now with signing by the governor, had been passed by the state in July. The bill aimed to help illegal immigrants get valid diploma and degree after attending three years of graduation in California.

The bill appeared in the legislature following a similar measure was opposed in Maryland. A state referendum has been sought in Maryland to repeal the law. Brown, a Democrat referred the Californian Dream Act as a sign of state’s progress toward a powerful and equal opportunity society.

This law empowers all illegal immigrants who have lived in the United States for at least five years and indirectly paves way for their citizenship by joining college or military. The same bill was presented in December 2010 also, but it was submerged following the Republicans took control over the House of Representatives.

The California Dream Act however has been severely criticized by its opponents who call it a false promise to the illegal immigrants in the United States. They further keep on saying that, even doing college or opting for military services will not change the status of illegal immigrants and they would not get any legal employment in the state.

The migrant community of the state hails the California Dream Act as a path to be a legal part of the system especially for those who have come to the United States by illegal means.