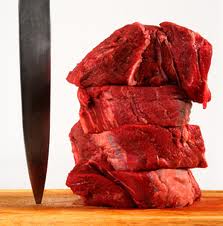 Cutting Back on Meat Reduces Chances of Getting Cancer

It is believed that being a vegetarian is more beneficial for health. However, those who are meat eaters should watch out how much meat they are consuming.  The Department of Health in England advises people to eat less than 70g of red or processed meat a day to reduce the risk of cancer.

Bowel cancer is the third most common cancer in the UK and every year 36,000 are diagnosed with bowel cancer. Out of them, 16,500 people die every year. Eating 100-120 grams of red and processed meat everyday increases the chances of bowel cancer by 20-30 percent.

This could be prevented if people restricted their red and processed meat consumption levels to 70g or less. This means you should not consume more meat than what is contained in three rashers of bacon or two sausages.

But critics have pointed out that iron deficiency is an issue which meat eaters could experience when they cut back on red meat. Iron deficiency could cause dizziness, anemia and result in behavioral problems. The new meat eating limit will not cause iron deficiency.

Prof. Sally Davies interim Chief Medical Officer of England favors the cutting back on meat. She is not against the consumption of an occasional steak, but recommends limiting daily consumption of red and processed meat.