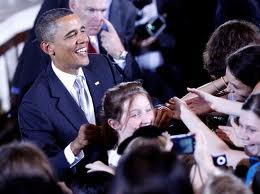 The US president got a relief when Democrats have moved toward approving his deal to extend George Bush’s tax cuts for the richer section.

Obama’s chances of getting 60 votes required to pass his Tax relief plan were quite bleak as Democrats were quite apprehensive and feared that he might compromise too much with Republicans, the opposition party members. Obama asked the ex-president Bill Clinton to persuade Democrats to approve the deal.

Following the Democrats’ approval the bill would go to other house of the Senate in the House of Representatives. Obama is likely to win in the other House.

The Republicans won in the November 2 congressional elections taking control over the House of Representatives.

The proposed bill includes a package of $856 billion and extends unemployment benefits and tax breaks for lower income groups. The bill if passed will also revoke many subsidies for businessmen and renewable energy sector.

The deal retains all tax relief schemes for richer Americans passed under the Republican government under George Bush which would otherwise expire by January 1.

However, the Democrats wanted to raise tax rates for rich Americans by 2% to lower the already high deficit of the United States.

They were resentful for Obama’s readiness to retain Republicans’ tax cuts and agreed to support the bill only after former president Bill Clinton’s persuasion.