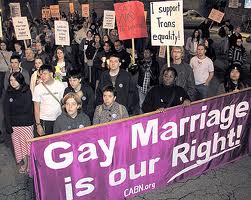 The Americans are going to hear a crucial verdict on same sex marriage in a federal appeal court of San Francisco. Michael Hawkins is expected to opine his views over gay marriages in the hearing today. The Appeal court has appointed a three member panel for the purpose to argue on Proposition 8. The panel includes Judge Stephen Reinhardt and Judge N. Randy Smith who were appointed by former presidents of the United States. Michael Hawkins, was chosen by President Clinton and his vote on the same –sex marriage is issue is going to be very crucial on this matter. The panel has been appointed following an appeal against August rule. Vaughn R. Walker, chief jury of San Francisco’s U.S. District Court had made a ruling on this issue saying. that the U.S. Constitution was violated by the 2008 ballot measures. The San Francisco panel would discuss over the legal viability of anti-same-sex marriage appeal against Walker’s ruling and also find out if the 2008 ballot measure were being followed. The measures had revoked a restriction on same sex marriages and thus were contrary to the federal constitutional rights of equality. The hearing is being considered very crucial by the law experts for homosexuals all over the world. Top US legal experts will participate in the hearing handling the anti-gay marriage appeal and contradictory constitutional issues. The San Francisco court had declined defendants challenging the proposition 8 and allowed them only to appeal against August ruling. ProtectMarriage.com is also a part of this appeal it represents voters for the Proposition 8 was allowed to defend the proposition.