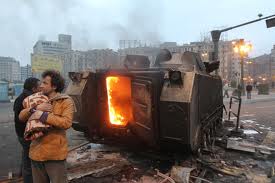 The United Nations asked its members to move from Egypt seeing the mass unrest in the country. More than 5,000 passengers were besieged at Cairo airport following the violent protests in Cairo against President Hosni Mubarak.

The U.N. has sent two chartered aircraft to take back its 350 staffs and their families safely to Cyprus.

Rolando Gomez, spokesperson for the UN stated that the organization has shifted its 600 employees temporarily from Egypt to Cyprus due to security reasons. They would however, continue their usual service from Cyprus.

Around 1900 US citizens have left Egypt within three days and the United States is providing emergency supports for travel documents and flights to all its citizens for evacuating. Additional flights are being provided on Thursday to evacuate foreign nationals safely from Egypt. More than 150 US citizens were found waiting eagerly to board any available flight commercial or government-chartered flight.

There was a heavy congestion on the Cairo airport as more than 5000 passengers crowded there on Wednesday. The passengers had reached the airport fearing the bloody street brawl in the Egyptian capital city.

The mass unrest has engulfed Egypt since January end. Thousands of flights have been cancelled in the wake of violent protests. Tourism sector alone has suffered a loss of $1 billion so far in last 10 months.