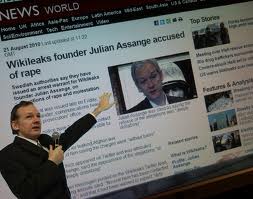 After a growing demand for trial in sedition and sex-crime charges, WikiLeaks chief Julian Assange has stated that he will release the entire set of unfiltered documents if more pressure mounted on him.

The 39-year-old Australian has been in news for leaking so many confidential military and diplomatic files of the United States and other countries. Mr. Assange has said that the unpublished lot of secret documents will come handy for him in future.

The secret file, protected with an encryption key, contains the entire version of US documents grabbed by WikiLeaks till date. This also includes unpublished part of documents, which had names and details of sources.

After remaining silent for past few day, the WikiLeaks founder has come out more vocal this time, shielding his activities, condemning critics and challenging world leaders.

WikiLeaks chief’s lawyer has issued a warning in which he says if Assange is forced to face trial in the charges levied by the United States and other world leaders, then Assange will decide on releasing the encryption key. The release will make sure that the millions of people who download the file have access to names, addresses and other details mentioned in the file.

Assange’s lawyer further said that his client was facing threats of death or arrest from the U.S. and Saudi governments and the officials were also trying to shut down his websites. In addition he was wanted to answer against sexual-crime allegations by the Swedish court.  However, Mr. Assange had denied all these allegations. He has reportedly taken refuge in Britain.