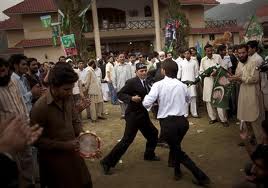 Fear of unrest in Middle East

There is an aftermath of Egyptian revolution and Mubarak’s exit leading to chaos in entire Middle East region. Uprising of Egypt and Tunisia have clearly demonstrated how people are dissatisfied with autocratic governments and common people have realized the need to voice their protest against sectarian violence.

The precautionary measures taken by governments of different nations in the Middle East to suppress any possible uprising after Egyptian crisis clearly show its impacts.

Yemen  too has witnessed an uprising as hundreds of demonstrators protested on Sunday. They marched to Presidential palace and took over the streets in Taizz City.

Yemen people are more enthusiastic following the fall of Hosni Mubarak’s government in Egypt and they too demanded ouster of Yemeni President Ali Abdullah Saleh.

Many other nations in the Middle East are facing political crisis and governments are deploying riot police trying to suppress public movements. In Tunisia, President Zine el Abidine ben Ali was overthrown on Jan 14.

From Morocco to Iran, the entire Middle East region is going through a dogma of religious extremism and sectarian violence which common people want to get rid of. There is a continuous struggle between wealthy and have nots along with political violence and corruption.

Jordan and Egypt had been the two nations comparatively peaceful than any other nation in the region. They had signed peace treaties with Israel. But recently thousands of Jordanians entered Egyptian embassy to celebrate Mubarak’s exit. This indicates how the people are eager to embrace democracy in Jordan too.