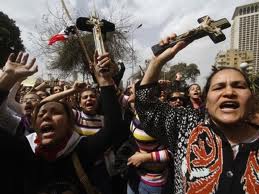 At least 12 people are reported dead in a bloody clash between Muslims and Coptic Christians in Cairo the capital of Egypt. Casualties include dozens of people; Coptic Church was attacked. This incident is one of the bloodiest clashes since the ousting of President Mubarak February this year.

The ugly incident occurred on Saturday at Imbaba in Cairo. It started when hard line Muslims mostly youths launched an attack at Virgin Mary church. The attacks were carried out to several buildings that were located not far away from the location.

This is the outcome of the long standing grievances among the Muslims who believed that the Copts are preventing Egyptian women who had wanted to convert to Islamic religion from doing so.

The attack also continued on Sunday during a rally attended by both religious groups which was aimed at unifying the state and pressing for protection from the government.

The violence has taken the military government who are in interim control of the country by surprise as they were not prepared for it. It is assumed that the attack was planned by a radical Muslim group which called itself salafists. This is faction within the Islamic religion in Egypt. The group has become more visible in recent times.