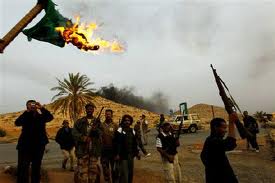 The government of china has made its first confirmed contact with the Libyan rebels. This is one of the latest diplomatic setbacks encountered by Moamar Gadhafi. France said that it is persuading people that are close to the Libyan leader to convince him to leave power.

Chinese diplomats and Libyan rebels met in Qatar as a result of defections to the rebel sides by notable figures in the Libyan governments. As the war in Libya intensifies the rebels and NATO had made the departure of Gadhafi as a condition for ceasefire in the country. Gadhafi has said in clear terms that he will not leave the country. He told the South African president who came on AU delegation that he will not leave Libya. NATO had this week extended its operations which were supposed to end by June 27th for another 90 days sending a warning to Gadhafi that they are not prepared to leave Libya until they have accomplished their aims in the country.

Reacting to the situation in Libya the French foreign minister Juppe said that Col Gadhafi is more isolated adding that more of his loyalists are defecting. The Chinese foreign ministry has said that the Chinese ambassador to Qatar had discussed with the Libyan rebels on ways to bring about the development of Libya.