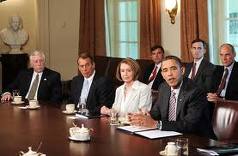 Republicans simply stuck to criticizing Obama and the Democrats for their failure to curb federal spending on entitlement programs without offering any cuts from their sides. They are not revealing as of now what they are going to put forward in their budget plans for 2012.

President Obama has asked for adult conversation on this issue. He is of the view that the Democrat government has been able to pass the healthcare legislation even in the face of stiff Republican opposition. The bill would reduce debt by $250 billion in the next 10 years. But the effort to cut spending on entitlement programs would require both the parties to come together.

Obama is hopeful that they can handle the issue of Social Security the same way Ronald Reagan and Tip O’ Neill had done it. For this the opposing parties have to come together and make modest changes, he opines.

Democrats are working on the suggestion made by the bipartisan panel that made suggestions to cut Medicare, Medicaid and Social Security to reduce debt. USA debt stands at 62 percent of the GDP in 2010 in contrast to one third of the GDP. In 2020 debt will reach to 90 percent of GDP and by 2025 the entire tax revenues will be used to fund Medicare, Medicaid and Social Security.

Henry J. Aaron, a senior fellow at the Brookings Institution, is of the opinion that other programs such as food stamps, housing vouchers and disability payments that only further inflate the problem, also need to be taken in to account to address the issue. This will be a tough task as legislators have to keep their pledge of not raising taxes but they have to cut deficit deeply.