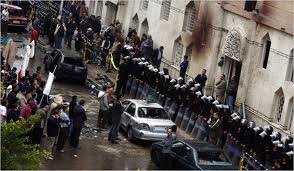 The New Year bomb blast in a Church that killed 21 Christians and injured hundreds of them has left Egyptians in outrage. There was intense clash between the security forces and angry crowd that faulted government for the attack targeting a particular religion.

Riot police used tear gas to remove people from the site and people threw stones on the security personnel. There have been demonstrations on the bomb blast site on Sunday.

The Christians in Egypt largely believe that the administration would have taken some stern steps to stop terrorist activities had the attack have been on a mosque—Muslim’s religious place.

The Saturday attack is being considered most severe in terms of casualties and impact so far in recent four decades. The bomb exploded when Christians were doing New Year mass worship at Saints Church in Alexandria on Saturday.

The blast symbolized violence against Coptic Christians in Egypt. Coptic Christians account for 10 percent of the total population of Egypt. Security officials revealed that the attack indicated that communal harmony was totally lost between Christians and Muslim communities in Egypt and there was increasing tension and intra-communal violence.

Experts claimed that within 30 years of President Hosni Mubarak’s rule communal violence was on rise.