The internet giant, Google acquired Metaweb in an effort to improve their search results. In a statement released on the official google blog, the Director of Product Management, Jack Menzel said that Google “acquired Metaweb, a company that maintains an open database of things in the world“. According to Jack Menzel, by working together with Metaweb Google wants to improve search results and make the internet richer and more meaningful for all users. 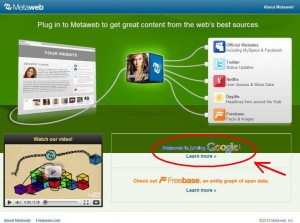 Metaweb confirmed the news by adding an image link to the google blog post. But the graphics looks horrible. Some one with basic photo editing skills whould able to produce a better image and match with the background color. It makes me wonder if there are any graphic designer working for Metaweb. Nevertheless, Google decided to buy Metaweb.