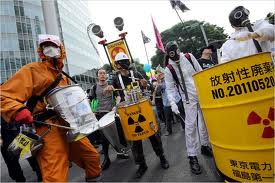 People of Japan took to the streets with drums and flowers protesting the use of nuclear power plants by the country. The protests took place in Tokyo and the other major streets of Japan on Saturday. The protests came almost three months after devastating nuclear disaster in the country which was triggered off by tsunami.

There has been tension in the country for some weeks now after the authorities revealed that the damages and leakages of the radioactive elements in the nuclear power stations were worse than revealed. Everybody in the country became worried especially the mothers who were worried over their children. Other professionals were worried they would be affected in one way or the other. The citizens of the country were not happy with the prime minister over the government handling of the nuclear crisis.

The nuclear disaster has opened debate in the country whether they actually need to depend on nuclear power plants giving the country topography which made it prone to earthquakes and other natural disasters. Recently the prime minister has directed that a nuclear power plant in central Japan should be shut down until they are able to provide the facilities that would ensure the protection against tsunami.