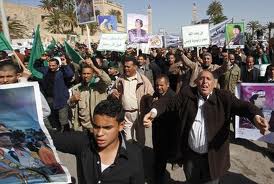 Col Muammar Gaddafi’s regime is trembling due to unprecedented public unrest in Libya. To worsen the situation even senior diplomats have defected from the government to support the protestors’ demand and ask Gaddafi to resign.

Protesters flooded Tripoli   slogans and the security forces tried to suppress them by using tear gas and live ammunition.

Another Libyan city– Benghazi has totally been overtaken by the protesters.

Saif al-Islam warned against the probability of a civil war in the wake of continuous mass protests. Saif al-Islam is the son of Col Gaddafi.

Saif al-Islam pledged to make political reforms however stressed that the government would do anything to avoid unrest in the country and take action against the extremists.

The Libya government is taking stern action against the protesters and according to the witnesses it was rather a massacre organized by security forces in the Green Square in Tripoli.

Abdel Moneim al-Honi, Libyan envoy to the Arab League also declared joining the protesters and, Ali al-Essawi, country’s ambassador to India stated that he would be resigning to express his protest against government’s violent suppression.

Ex-chief spokesman for the Libyan government– Mohamed Bayou also admitted that the current government had failed to tackle with the political crisis and flayed the leaders for threatening protesters with violent actions.