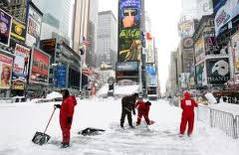 Michael Bloomberg, New York City Mayor has assured people after failing to help people x during blizzard that the administration would be prepared to tackle with any problems from now taking a lesson from their failure in post-Christmas storms.

It has been predicted however, by the National Weather Service that New York may experience 8-14 inches of snowfall along stormy winds with a speed around 25 miles per hour. Visibility would also be reduced. Therefore, the claims of the administration are not so far from being tested once again.

The Mayor admitted that the city lacked adequate equipment to clear roads and assist emergency needs of people in time but they would ensure this does not happen again.

He declared a “weather emergency” on Tuesday and advised people not to drive. drivers were given caution for parking their vehicles at proper places and it is hoped that no traffic jam will occur due to too many vehicles parked on the roads.

Schools are yet not opened till Wednesday.

Transportation, Parks, and Environmental Protection departments are assisting in clearing off snow from streets and roads. A new 15-point plan has been launched by the city administration to give quick response to people at the time of blizzard. GPS systems and Sanitation Department have also offered their services for emergency hours.