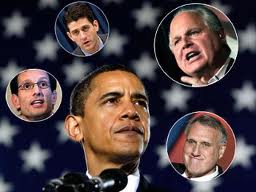 A new scenario is waiting in Washington for US President Barack Obama after vacations. Republicans with more prominence in Senate now will prepare to make it a tough time for Obama over budget while the countdown for 2012 elections is already started.

Democrats expect Obama to deal with the new political disputes with a more confident stand.

This new phase of Obama’s administration will witness Ruling party’s bipartisanship with the Republicans that may change the tone and strategies of present government and would definitely affect ballot boxes in 2012 presidential polls.

However, despite the compromises made on tax issues, nuclear treaty with Russia and same-sex relationship in military, Obama still occupies an increasingly focal place in his party.

The President acknowledges the challenges coming ahead and expressed hopes to continue to be in tune with common Americans needs and purposes.

The status of Democrats has changed with Republicans overtaking them in the House after November polls. Obama’s land mark steps on Health care bill and $800 billion package were taken much before when the Democrats dominated so only time will tell whether the President will be able to continue with same impact in making decisions or not.

There is a strong probability of confrontations between the two parties over key issues like budget deficit of 1.3-trillion-dollar and government budget for 2011.