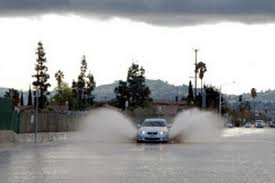 Western parts of the United States are still struggling to resume their traffic amidst snowstorm. Major roads Arizona, California and Nevada have been shut down once again due to heavy rains following the snowstorm. Heavy snow carried by storms has covered hilly regions which have led to power cuts and traffic jams.

Phoenix desert which otherwise experiences pleasant winters had chilly rain continuously for an hour that resulted in temperature much below freezing point on Friday. Main road across Arizona –I-17 ahs been closed and commuters are stranded between the Grand Canyon and Flagstaff.

Visibility reduced to a mere half mile near Grand Canyon and it was only ¼ th of a mile at Flagstaff according to the officials of the National Weather Service.

The Highway 89A which links Sedona and Flagstaff was closed till Tuesday. routes which were opened also had many vehicle collisions in central Arizona. Forecasters said the blizzard might shift to New Mexico by Thursday.

The met department also predicted speedy winds up to 50 mil per hour  in parts of northern Los Angeles Few casualties were also reported due to snow storms and falling trees. There was also a boat lost in the strong winds with 4 people on board.